As of 2013-2014, Warth-Schröcken and Lech-Zürs are connected by a mostly horizontal 10 person cable car. A change many saw coming, as the two areas had been in sight of one another for a long time.

Skiing enthusiasts enjoying their stay in Warth-Schröcken would now have the opportunity to ski in the luxurious Lech-Zürs ski area. But not only that, the whole Lechtal and Bregenzerwald would now have a connection to Lech-Zürs, something which had not been possible before, as the road to Lech remains closed during the winter.

As you might guess, connections as these do not only have positive sides. Let’s explore the effects of such a connection on a medium-sized resort as Warth-schröcken.

First of all, let’s be clear: Warth-Schröcken and Lech-Zürs are two completely different ski resorts. Even though the two are only mere kilometres apart from each other, the atmospheres in both areas could not be further apart. Warth-Schröcken is plain and simple, whereas Lech-Zürs characterizes as luxurious and sophisticated.

This is easily recognized in the price levels. For example, a 4-person ski-in / ski-out apartment in Warth costs 1000 euros in the peak season. In Lech, you pay 9000 euros. Kaiserschmarren costs 10,50 euros in Warth. Compare that to 17 euros in Lech.

After connecting the two areas, Warth has seen a small rise in the pricing levels. A logical development, as the resort more than doubled its facilities after connecting to Lech. Still, compared to Lech, Warth is and probably will always be the cheaper alternative.

Then there are the lift tickets. In Lech you have one option, the Ski Arlberg pass, valid in the whole Ski Arlberg area. Pre-connection era, Warth also had only one option: a Warth-Schröcken pass that would automatically convert into a 3 Täler pass after 2 days, making it valid in the whole Bregenzerwald skiing area. That changed, but in a positive way. Nowadays, Warth-Schröcken still offers the 3 Täler pass together with the Ski Arlberg pass. This 3 Täler pass is significantly cheaper with its 233 euros compared to 289 euros for the alternative. The fact that Warth-Schröcken still offers the 3 Täler pass deserves credit, as many resorts that connect with a cable car often only offer one kind of ticket after the fusion; which is more often than not a lot more expensive. 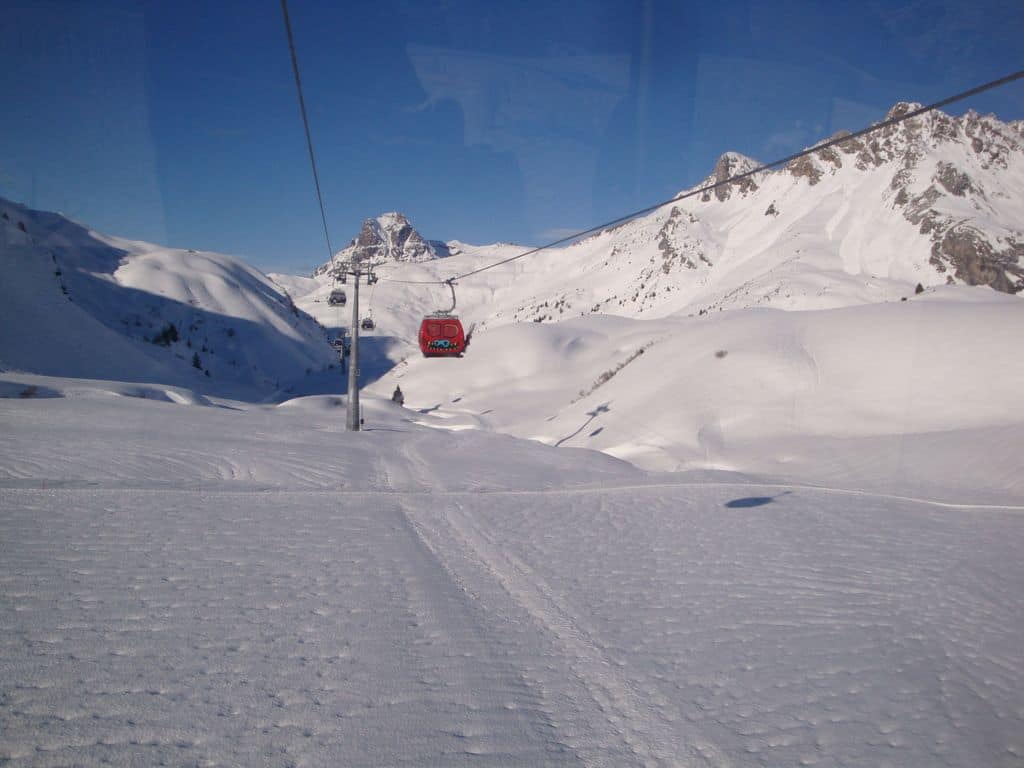 The Auenfeld Jet, the cable car that connects the tow resorts

Another important factor that often comes into play when connecting two ski resorts is the increase in popularity. Warth-Schröcken used to be not that well-known to the public. As waiting lines were almost never an issue, slopes were often empty and you would always have a seat at a mountain lodge, even during peak season. Things are different now. Even though Warth-Schröcken has a quota of 8,000 daily passes per day, more skiing enthusiasts than ever visit the resort since the connection. This has two causes: now that the two areas are connected, Warth-Schröcken is the cheaper alternative for skiing the whole Arlberg region in one week. The quota does not have an effect on this, as it only applies to day passes. Besides that, Warth-Schröcken is the only ski resort with 300 km+ slopes accessible via Vorarlberg; something which attracts a lot of day-trippers from Southern Germany. Now combine the day-trippers with the newly attracted visitors and you got yourself a busy week, especially in the peak season.

There is a lot to say about connections like these. For Warth-Schröcken it was a welcome one, but not without some negative consequences. The resort has a lot more to offer now, but at the cost of increased traffic and a small price increase. However, when you compare the negatives to the positives, Warth-Schröcken profits from its increased diversity and popularity, while taking the original visitors into consideration. A well-made connection.

SNOW IN THE NORTHWESTERN ALPS

MEMORIES OF RAURIS, A VILLAGE TO LOVE