FOUR TRAIL MAPS THAT WILL SUPRISE YOU

We all have different views of what makes a good ski resort. Some prefer an endless amount of slopes, others like the more cozy, smaller family skiing area. Some like après-ski until midnight, while others would rather be relaxing in the swimming pool. Even though we all have our differences, we all share the same feeling of expecting… something different, be it positively or negatively. Where things had appeared just a little different on paper than they do in real life. In this blog, I will explore 4 ski resorts that may trick you with their trail maps. 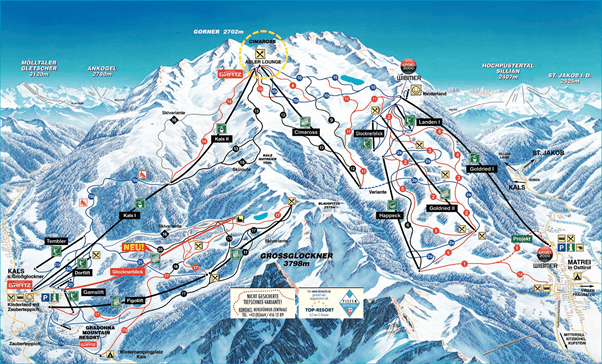 Starting off with the ski resort of Kals-Matrei, which is located in Ost-Tirol. Although it is the biggest ski resort in the region with 44 km, it might not exactly feel like that. The reason for that being two-thirds of the slopes located on the same side of one mountain. To illustrate what this feels like: if you want to ski from Kals to Matrei, you need only 1 lift and 1 (long) descent. The map feels way bigger than it is in reality, which can also be seen in the slope length. Slopes look very long on the trail map, whereas in reality, they’re not as long as they seem. But, credit must be given where it’s due: the Kals-Matrei ski resort halved the number of slope km from 100+ to 44 after lots of 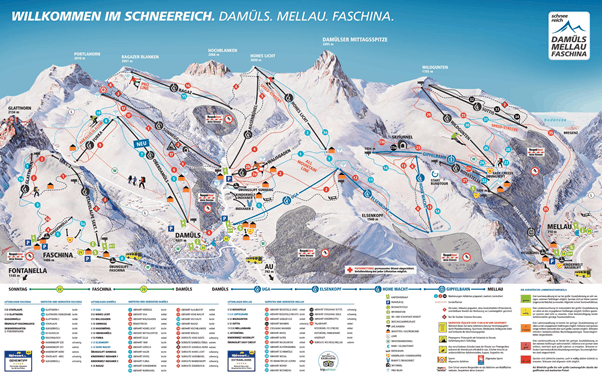 Where Kals-Matrei might be smaller than it looks, Damüls-Mellau is the complete opposite. Because of the enormous width of the skiing area, every cable car provides a different view of the Bregenzerwald. Nearing Mellau, you can even see the Alps ending and watch over the vast flatlands of Germany. Don’t let Damüls-Mellau fool you because of its 79 km, it is incredibly diverse in terms of views and slopes!

West gives a huge impression on this trail map. Long runs, multiple valleys, and lots of red slopes. However, none of this corresponds with reality, unfortunately. The red slopes don’t really seem red for Austrian standards, views don’t really change that much and runs are on the short side of the spectrum. Take for example the 5a slope near the Edtalm. Seems like a nice run, looking at the trail map. However, this slope spans only 169 vertical meters, something you would rather expect in middle-sized mountains. Therefore Dachstein-West is more of a family-oriented skiing resort than for the sporty skier. 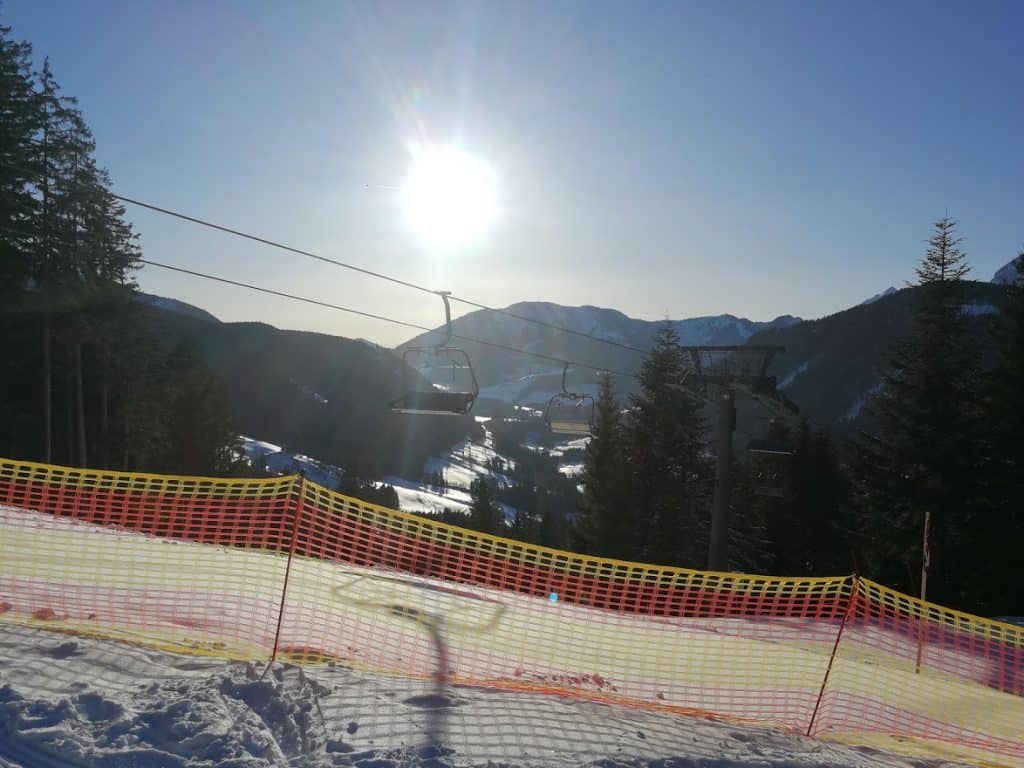 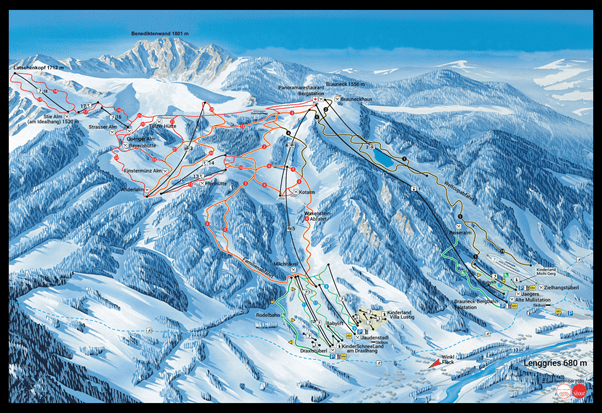 Visiting Brauneck is pleasantly surprising in many ways. Even though it isn’t big, it feels incredibly diverse for such a small resort on paper. Lots of variety in slope length, cable cars, and difficulty make this a pleasant one-day ski resort. The black slopes provide some difficulty for the intermediate skier while the red slopes provide some fun for every kind of skier. 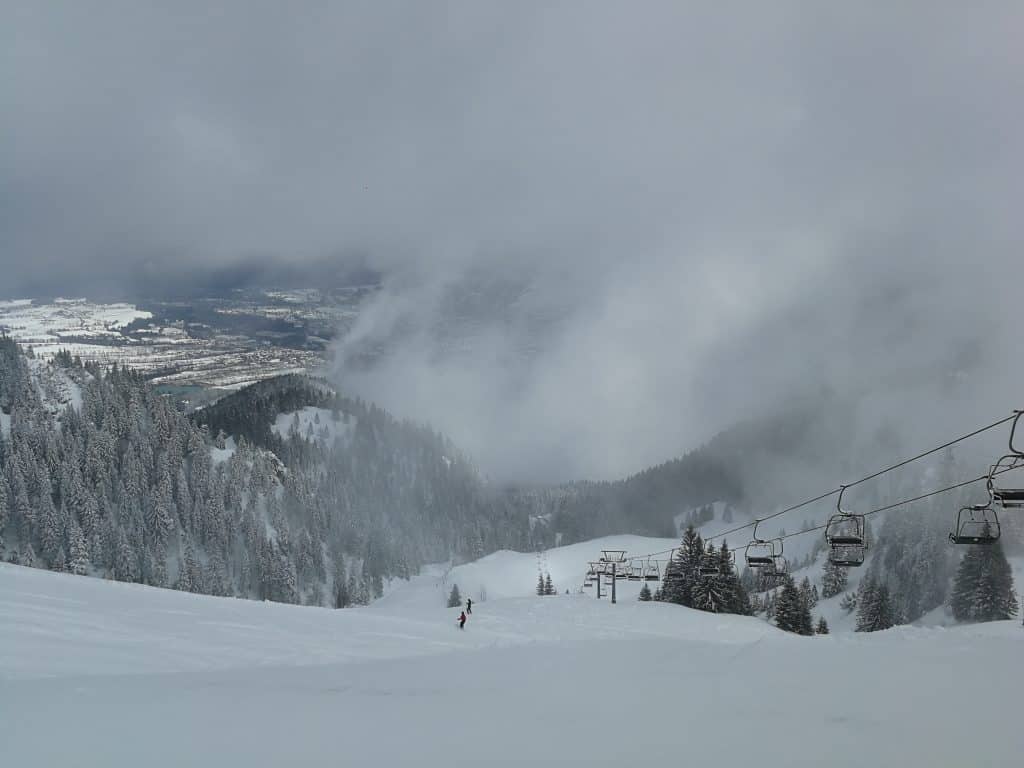 SNOW IN THE NORTHWESTERN ALPS

MEMORIES OF RAURIS, A VILLAGE TO LOVE

This website uses cookies to improve your experience while you navigate through the website. Out of these, the cookies that are categorized as necessary are stored on your browser as they are essential for the working of basic functionalities of the website. We also use third-party cookies that help us analyze and understand how you use this website. These cookies will be stored in your browser only with your consent. You also have the option to opt-out of these cookies. But opting out of some of these cookies may affect your browsing experience.
Necessary Always Enabled

Any cookies that may not be particularly necessary for the website to function and is used specifically to collect user personal data via analytics, ads, other embedded contents are termed as non-necessary cookies. It is mandatory to procure user consent prior to running these cookies on your website.