BUILDING MY OWN SKIS

Have you ever thought of building your own pair of skis? And have you ever considered actually realizing this idea? Well, I did and I will give explain why and how it works! 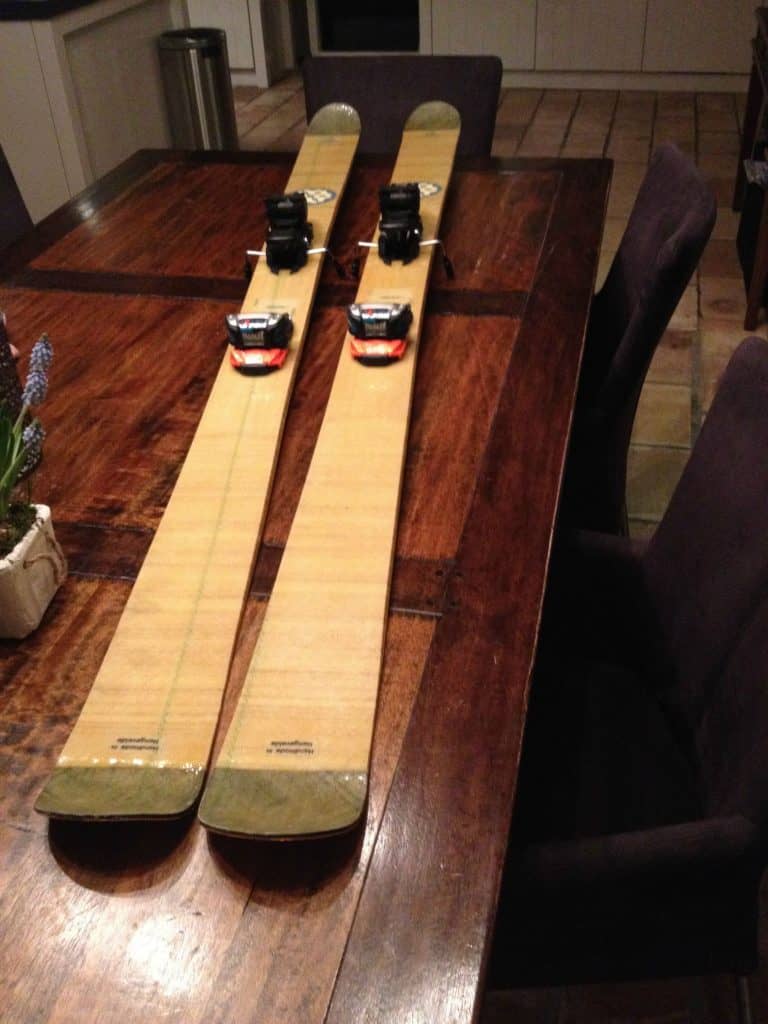 Everything started in high school at the age of 16. Me and two other guys had the crazy idea to build a ski and a snowboard out of wood. This would obviously require a lot of research on how to build it and after looking into it for months, we built our own ski and snowboard. Aren’t they looking beautiful? Fully handmade!

After testing them, I figured out that they were way and way too stiff and that they weren’t perfect to ski on. This gave a good reason to built another set of skis. One difference: this time we would do it right! How were we going to do this? By trying to optimize every step it takes to build a ski.

Let’s start with the design. This may be one of the most important steps in building a ski, because this is what defines the ski. The only missing ski in my collection was an all-mountain ski so I chose to build one. One important requirement: the pair should be as light as possible due to my weight and personal preferences. The three main features are:

Since it’s going to be an all-mountain ski, I decided to make it with camber underfoot and some rocker at the tip and tail, a little more rocker in the tip than the tail. Designing the ski and mold with the designing points mentioned above looks like this:

While building the mold, we noticed that we were short on wood so we had only enough wood to press one ski at a time. However, to get two identical skis it is recommended to press them both at the same time. So to accomplish this, I made the mold a little bit wider. Since the base of the ski should be as flat as possible I bought a PVC sheet to cover up all the empty spaces. After building the mold it was time to design a press. 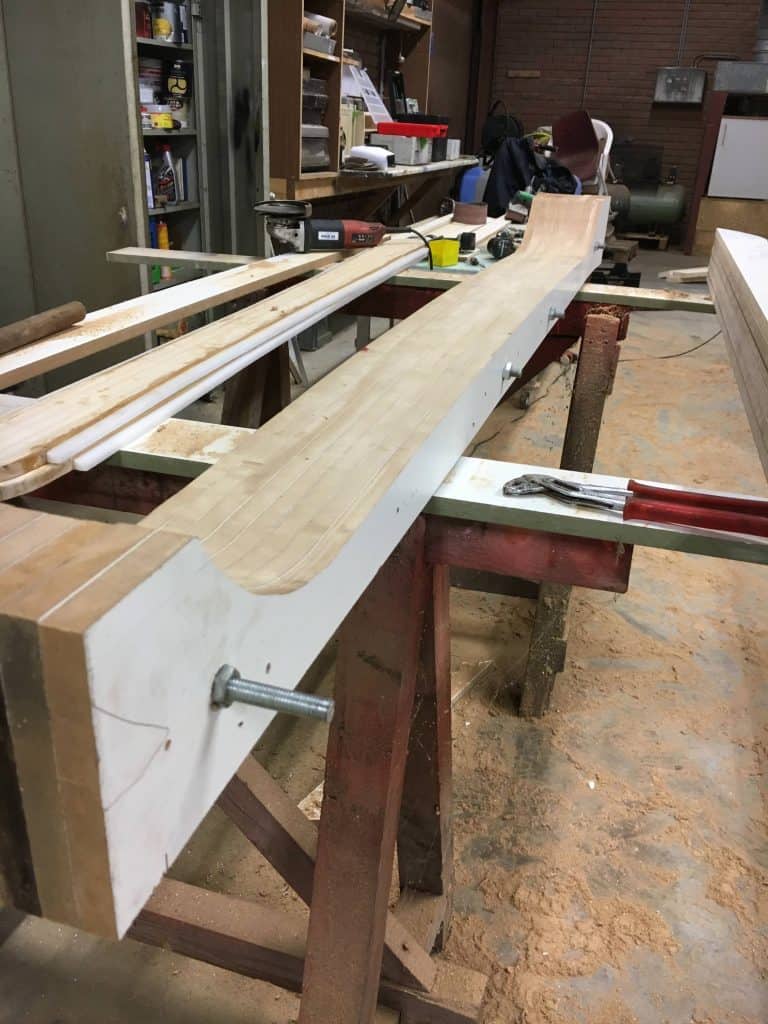 A ski consists of several layers that are pressed together under a certain amount of pressure. There are a few ways to accomplish this pressure. You can press with clamps, with a vacuum or with inflatable hoses. I pressed my first set of skis under vacuum and this second pair would be pressed with inflatable hoses. I chose this because I could design my own press which I could use for more skis in the future. By making a design, buying some wood, and buying a few old water hoses I was able to build a homemade press.

The key to designing a press is to get a uniform amount of pressure on the ski, this was done by making small wooden beams which are covering the entire ski.

A handmade ski is truly handmade when you can make your own design on the top sheet. I used an old glass fiber sheet. I pre-designed some ‘art’, as I called it. I made the top sheet based on this design: While making the top sheet, I changed the colors a bit because I thought it would fit better. The final design was a masterpiece. 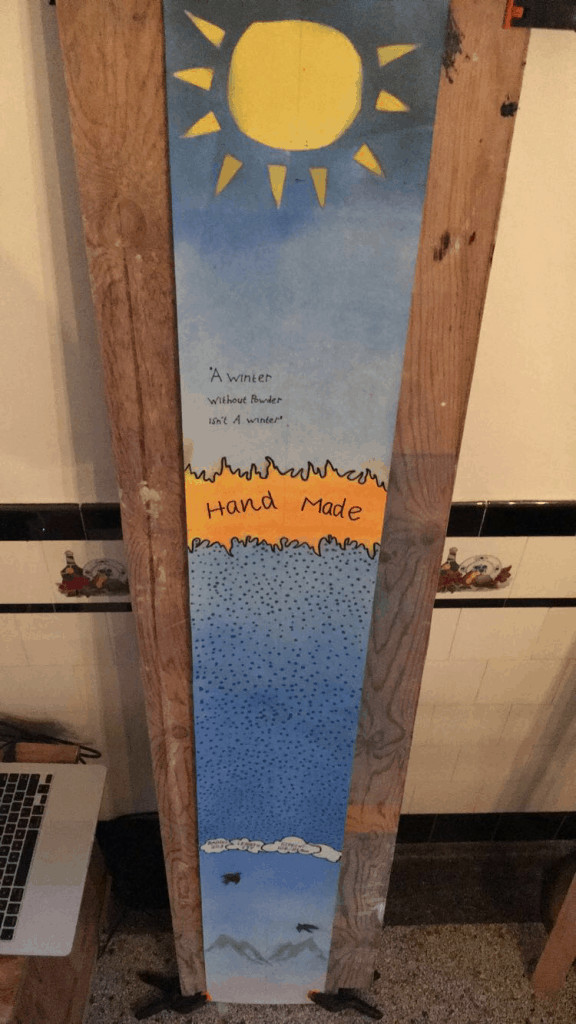 My first handmade ski had taught me that cutting everything by hand would end up in a ski with a very badly made sidecut and a very ugly looking base. Fortunately, for these new skis, I was able to get my hands on a water cutter which could cut all the materials with great accuracy. 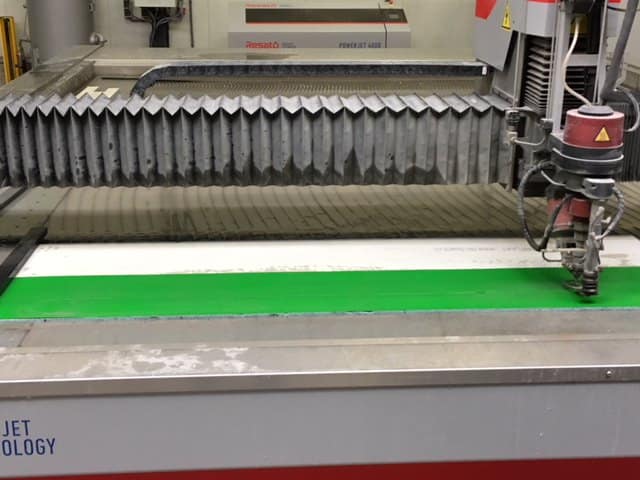 I wouldn’t call something perfect, but this…

Every ski has edges for grip. These are glued on the base. Bending them is one hell of an issue because the edges are very stiff and almost impossible to bend in the proper direction. Fortunately, after a lot of blood, sweat, and tears, I managed to bend them. Unfortunately, one of the edges snapped and had to be re-applied. 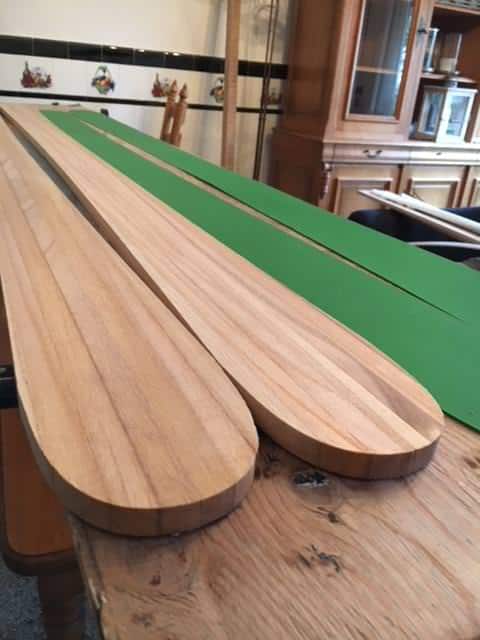 The next layer is the core, this comes on top of the base and it needs some profiling before pressing it. Profiling

is important so that the tip and tail are thinner than the waist where the bindings are mounted. Preventing rotting of wood I used sidewalls, those are plastic strips that are glued to the sides of the core. 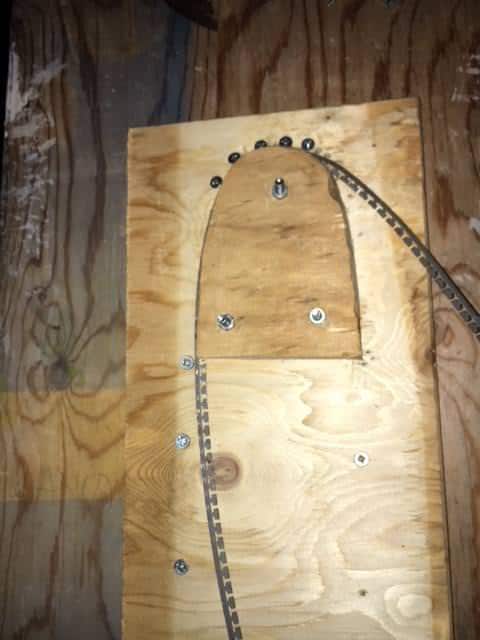 The profiling of the core can begin after the sidewalls are glued to the core. The tip and tail need more profiling than the waist since those are a lot thinner. The difference is around 1-centimeter thickness. Fortunately, the wood was very soft so this was quickly done with a nice result. 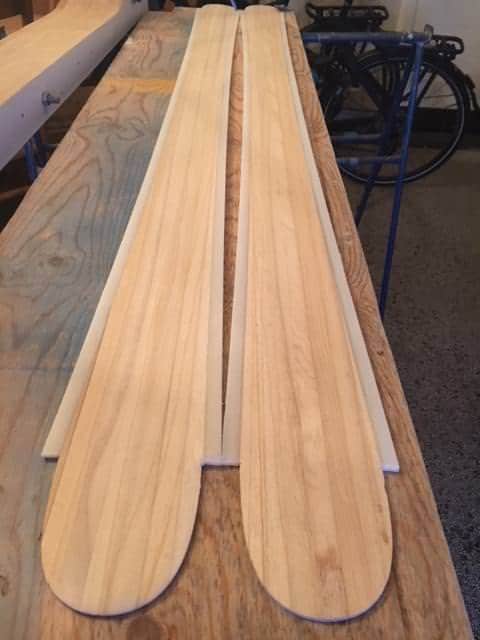 It was Boxing Day when I decided to press the skis. Why? Because I randomly planned a trip to the Pyrenees and I wanted to take them there. Unfortunately, due to Boxing Day and the amount of stress pressing the skis brought me, I didn’t take a lot of pictures.

Pressing a ski starts with the base, put epoxy on the base and cover it with rubber and glass fiber. The core is laminated after the glass fiber, and to top off the ski one more sheet of glass fiber is put on top of the core. The top-sheet comes on the top and this is also the last part of laminating the ski.

After putting all the layers in the mold, I noticed a large amount of epoxy left. Had I used too little? Could these skis delaminate? Well, nothing could change now. Fingers crossed and pray that it ends well.

While pressing the ski, I noticed a leak in one of the hoses after two hours. Fortunately, I was able to fix this so the hoses were giving a constant pressure. After 24 hours under the press, the skis came out.

They were looking amazing!

Getting the true shape of the ski can be done by removing the excess material and make everything smooth and clean. After doing this, I was very surprised by the result because even the shape was looking very good! Some binding finalized the job and they were good to go! 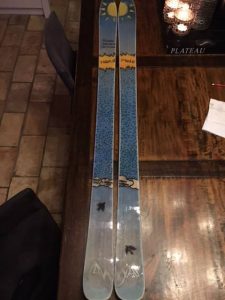 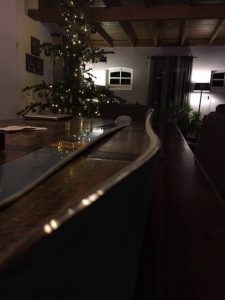 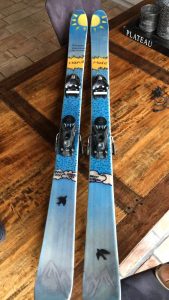 Obviously, after months of working, you’re looking out for one thing and that is testing the skis on the real snow in the mountains. As I said earlier, I planned a trip to the Pyrenees and they were finished before going so I took them with me. The ski does not have any metal or any other reinforcements so they were quite flexible, especially at high speeds. However, they were good to ski and very lightweight as this was one of the requirements. 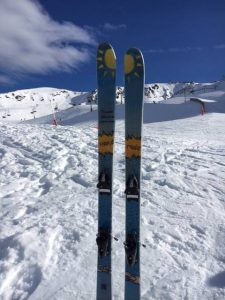 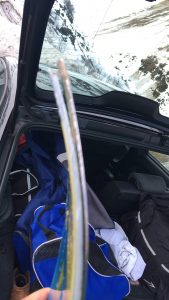 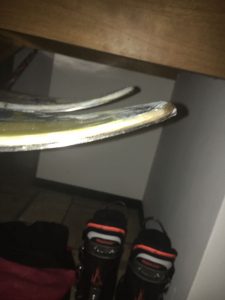 They were doing so well for two days but then I decided to take a jump and this was one big mistake, they delaminated… Fortunately, they were good to go again after fixing them with epoxy and glass fiber, good as new as I would call it.

There are always things which can be improved, lack of stiffness is one thing, laminating the ski with enough epoxy is another. There are plenty of ways to get more stiffness in the ski, carbon, or metal for example. This really depends on personal preferences and it would make skiing a bit smoother. The best thing about building your own skis is that you improve them every single time. This gives a lot of motivation to build another pair of skis with even more improvements, to the next ski (which has actually already been built)…

Not only started my wintersport history when I was four years old, it got a boost when I chose to study Applied Physics. What started with building my own ski’s as a physics project ended up in several homemade ski’s. Whenever I have free time I try to travel throughout the world and use these days to ski wherever it’s possible.

Not only started my wintersport history when I was four years old, it got a boost when I chose to study Applied Physics. What started with building my own ski’s as a physics project ended up in several homemade ski’s. Whenever I have free time I try to travel throughout the world and use these days to ski wherever it’s possible.