Avalanches are always a popular topic for conversations and articles in the press. Unfortunately, a lot of nonsense is told and so all kinds of misunderstandings arise each winter sports season. Therefore, Rolf Westerhof, Founder of Snow Safety Center, has summarized 11 misconceptions, hoping to clarify the unknown or underestimations of Avalanches.

1.       OFF PISTE; “Notoriously dangerous and even a potentially deadly hazard”.

Of course, every victim is one too many and you are always at risk outside the slopes and you need to know what you are doing. Relatively speaking, however, the number of victims is not too bad. Averagely speaking about 100 per year (too many) in the Alps. We do not have exact “yearly tourist numbers”, but this happens when many, many millions of winter sports lovers hit the slopes and go through avalanche-prone passages. Unfortunately, we cannot look away from the Dutch accident statistics and we should certainly try to do something about that. But Off-Piste Skiing or Snowboarding is certainly no more dangerous than other extreme sports such as Scuba diving, Skydiving, or Mountaineering. 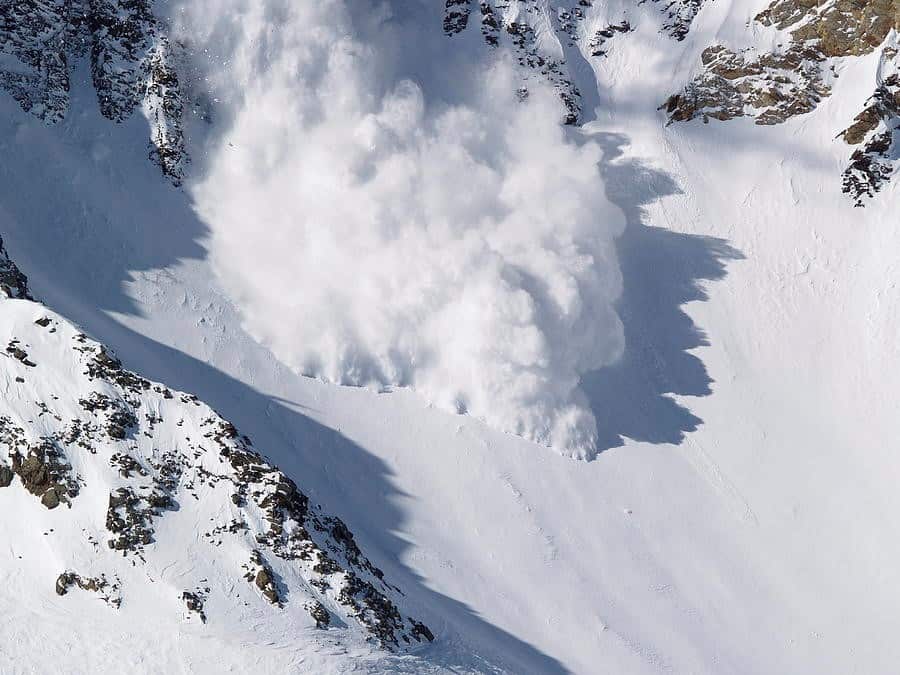 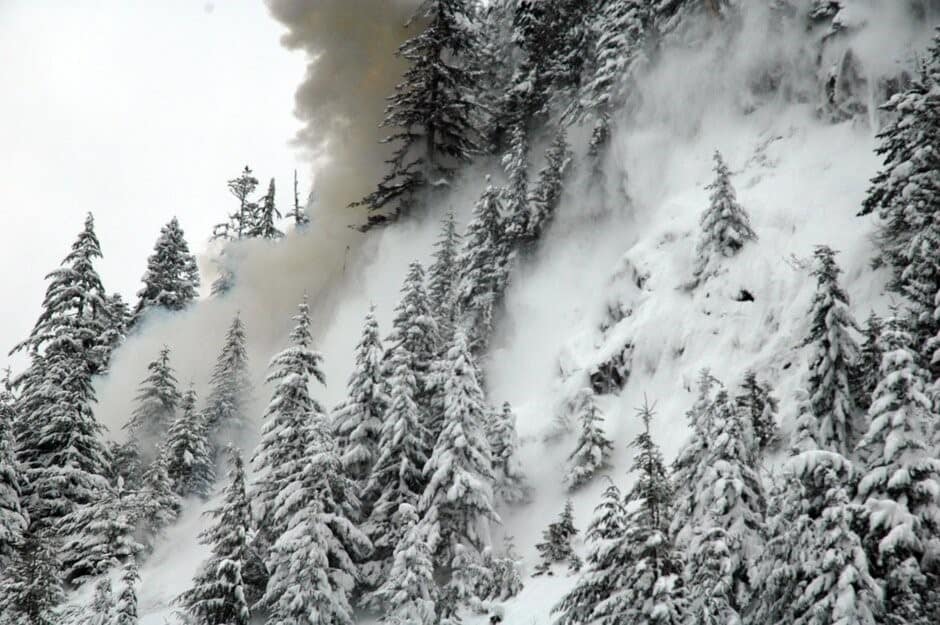 Not only the snow is a danger, but also the trees that you encounter along the way. In North America, it’s not without reason why forests are called; “Terrain Traps”: a terrain that makes the consequences of an avalanche even more serious.

You should also know that the tree lines in North America are much higher than in the Alps and that is where the misconceptions easily arise. Usually (but certainly not always!) the avalanche danger increases with altitude and in the Alps, you are more often in the forest below that critical height limit.

Fortunately, for that same reason, it often turns out to be okay in the forests in the Alps. It is true that the forest offers shelter when the biggest problem is wind and thus “Triebschnee”. On the other hand, any opening in the forest (with fewer trees) is an immediate danger. So, Enjoy the forest, but don’t ever underestimate it.

To make matters worse, the danger of this avalanche situation is very difficult to estimate, and it behaves unpredictably. This has been exactly the problem of this winter (2020-2021) until two weeks ago. In Switzerland, 17 victims had already been counted at the end of January compared to the long-term average of about 22 for a whole year! 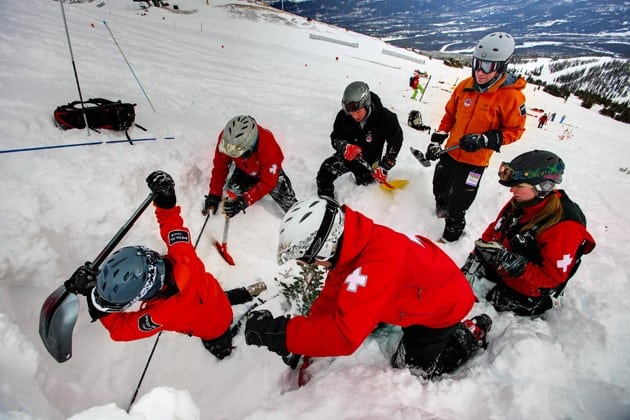 This is really crap ($%^&* bullshit! …even to be honest) More than 80% of all casualties are off-piste at hazard levels 2 and 3. Of course, this does not mean that levels 2 and 3 are more dangerous than level 4, but at level 4 the danger is usually more visible, and therefore fewer people will go off-piste with level 4. 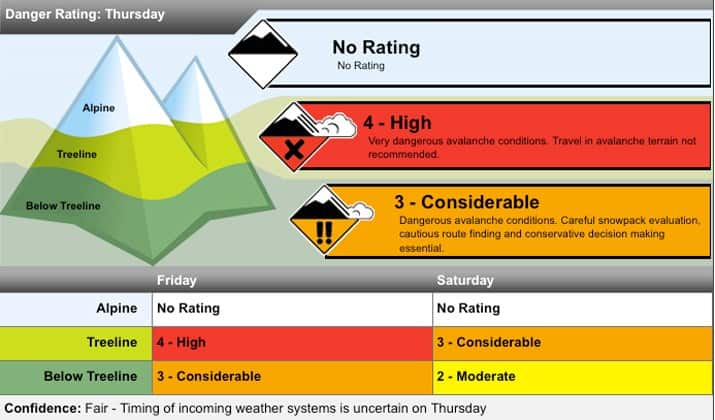 Reliable numbers are unfortunately missing. PLEASE REMEMBER: The statistics show that more than 60% (65% in Switzerland!) of all casualties happen during an Avalanche Danger Level 3. Unfortunately, Avalanche Danger 3 often coincides with the best days to enjoy the powder snow off-piste.

For example, it’s pretty normal to have a beautiful day after a period of rainfall. The sun is shining, everything is beautiful, no tracks or visible signs of other skiers – hardly any traces of people.

Beware of “The Powder Virus” on these days and be cautious! The first beautiful day after a period of bad weather is a typical Accident Day!

I wish it was true! This illusion is the result of clever marketing and questionable statistical tactics. An airbag is a very sensible investment and airbags have a much better chance of survival, but they really, don’t always work. Fortunately, very reliable research has been done into the effectiveness of airbags. Several mixed groups (consisting of people with and without airbags) who ended up in avalanches have been investigated.

LET’S SHOW THE ROUGH FIGURES OF THIS RESEARCH

Out of 100 people, 22 died without an airbag, and 13 people died with an airbag. Out of these 13 casualties, the airbag didn’t even inflate, it failed them. Their airbag had a mechanical failure.

So, let’s run the statistics. But, first, do you count these 2 casualties or not? They were indeed casualties with an airbag, but because they didn’t inflate it says nothing about the effectiveness of an airbag.

It’s clear we are talking about “real life” and apparently not every airbag will inflate. So:

Choose your outcome, but remember, to prevent is always a better approach! Because, even with an airbag, at least 13% out of a group of 100 skiers/snowboarders, will end up dying in an Avalanche.

Of course, bad luck plays a role now and then, but in more than 90% of the cases someone causes their own avalanche, or someone from the same group does. In other words, “you are not in a casino playing poker” where an avalanche accidentally falls on your head. What you do and don’t do determines whether an avalanche will occur!

And that is good to know! After all, this means that your behavior influences the risk you are willing to take. Going downhill on steeper slopes (30 ° or up) is trickier & riskier. 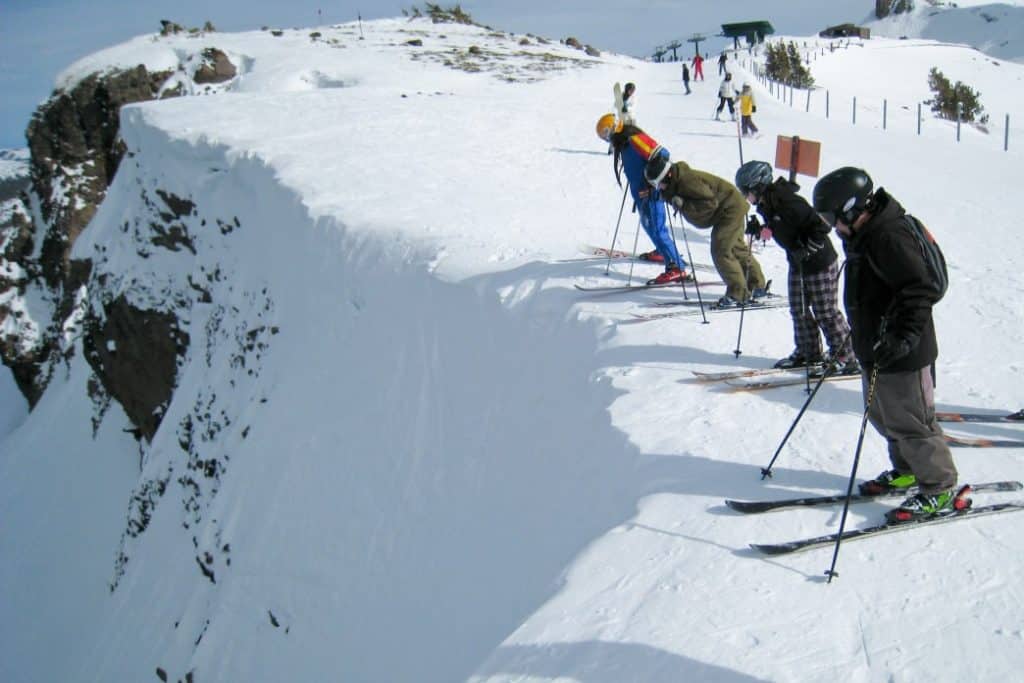 Going downhill (or climbing) in a pack is also taking a higher risk, than going downhill one by one. A landing after a jump (or a fall) also means an increased risk. And, so on. So, if you know what’s important and having the right amount of self-discipline you can really lower the risk of a possible avalanche danger to a more responsible level.

We all know those wonderful weather periods in December and January. It’s cold, the sun is shining, no hard winds or snow is falling out of the sky.
Wonderful winter sports weather! Still and however, the snow cover usually deteriorates under these conditions. How and why? That’s s a long and complex story.

But in small words explained: The multiple layers of snow are “glued” together and the persistent cold is bad for the glue. As a result, over time, these various layers of snow can slide off each other, especially when overtime the glue has gone bad. 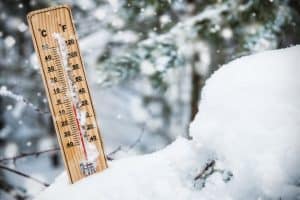 Fluctuations between -10° and – 2° however are great. This means the snow cover becomes more stable.

Hmmmm. Tracks in a slope are often considered a positive point, also by experts. But that does mean it makes the slope safe! Often not the first Skier/Snowboarder sets off the avalanche, but the 10th, or even after a hundred skiers went downhill an avalanche can set off.

Only slopes that are completely flattened-out and prepared after every snowfall are favorable.  Which means:” only in the regular ski areas and on regular slopes”.

Looking for that unique downhill ride, with fresh powder snow, a ride which no skiers have been before? You lose this advantage of course.  The same goes for heavy snowfall (>50 cm)!! 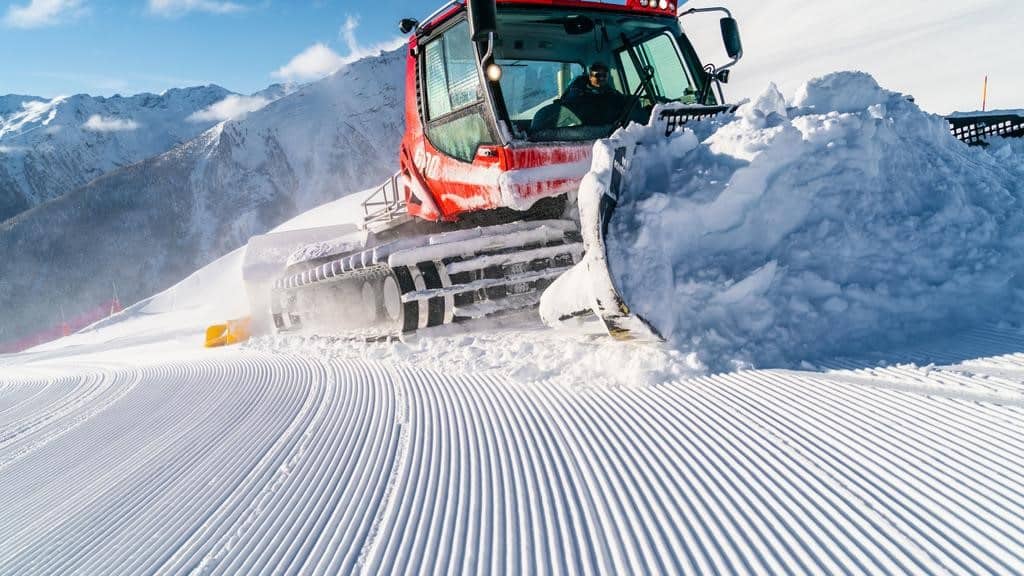 Nonsense. It all depends on the type of avalanche, the time of year, and the problem itself. Immediate dangerous avalanche situations (a thick dump, wind) stabilizes over time and are therefore often the most “trigger happy” in the morning.

What however is a fact, is that sudden warming of the snow cover during the day (especially if it happens for the first time in a season) leads to temporarily higher instability. And during the spring season, when the sun is already pretty strong, wet snow avalanches can set off.

This requires enough heating (higher temperature) first for these wet avalanches to occur, which means they will set off later during the day. However, the danger of this type of avalanche is easier to recognize, easy to predict and so very few accidents with wet snow avalanches occur.

In short: During the winter months on days when there is nice powder snow, the time avalanches can set off usually does not matter.

This is not a bad idea; it is just extremely difficult to execute. Just think; the snow normally breaks under you and the surface will then move. It’s like running on a carpet that’s being pulled out from under you. In addition, slab avalanches are much slower than large powder avalanches, but they often reach more than 100 km/h.

A victim’s GPS tracker has already measured 137 km/h. Standing still under these circumstances is already pretty difficult and you also have to reach a considerable top speed!

So, it’s clear is a very high impact & very intense mission, and only which few people are capable of doing. But you should try it!

Indeed, sometimes even skiers or snowboarders with a lot of experience and knowledge end up in avalanches. But a thorough knowledge of these circumstances and a toolbox full of skills and expertise, such as map reading, estimating steepness, and being able to fathom an avalanche forecast, does enable minimizing the risk. However, the risks will never be ZERO. 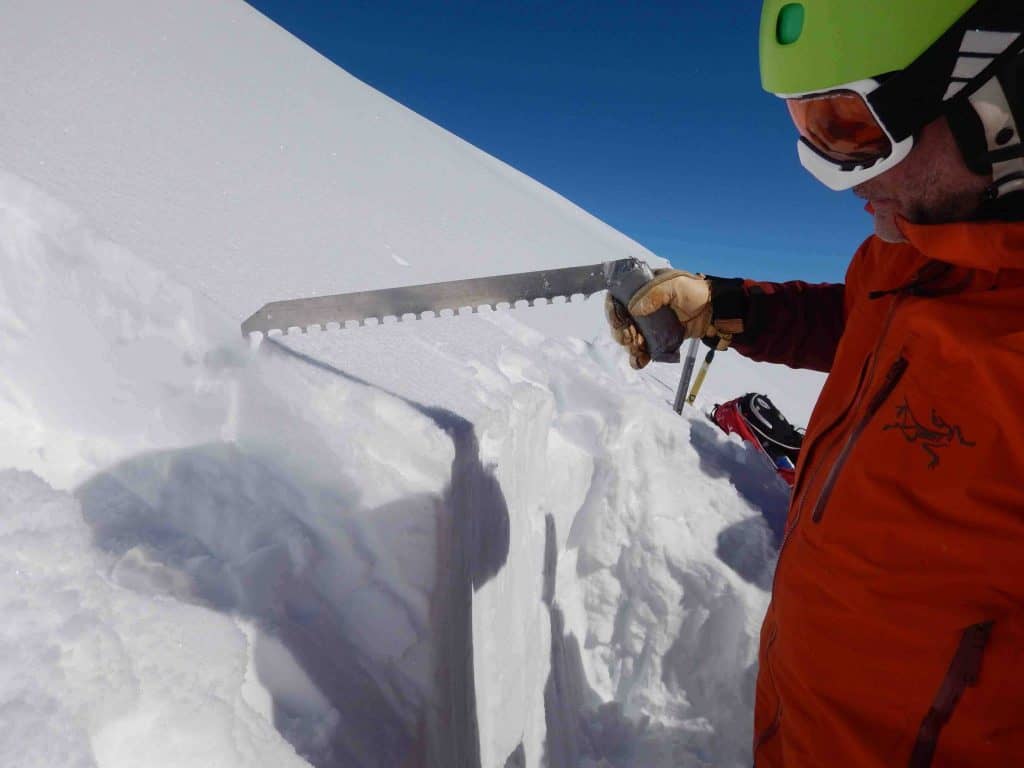 And since a lot of winter sports lovers consider themselves skiing or snowboard expert, therefore I can also say; it’s up to yourself to weigh the risks and determine what risk you are willing to take!

Establishment and management of the Snow Safety Center. Off-piste safety training. Avalanches and high mountains. Compiling curricula for theory and practice. Giving lectures and courses for very different audiences from MBO students to university-educated adults. For amateurs and professionals. Providing posters and plenary presentations at international conferences (so in English). Furthermore, many contacts with French-speaking specialists and organizations. http://www.snowsafety.nl

Establishment and management of the Snow Safety Center. Off-piste safety training. Avalanches and high mountains. Compiling curricula for theory and practice. Giving lectures and courses for very different audiences from MBO students to university-educated adults. For amateurs and professionals. Providing posters and plenary presentations at international conferences (so in English). Furthermore, many contacts with French-speaking specialists and organizations. http://www.snowsafety.nl